Join our Collector Community!
You are here: Home / About the Artist / Linda V.G. Kelley 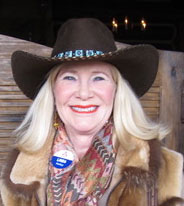 Linda Van Gilder Kelley’s art career began when she was 13 years old and won a painting contest in her hometown of Middletown, Ohio. She attended Miami University and Ohio University (B.S. with a Minor in Art). She received a Master’s degree in Educational Communications at the University of Hawaii in 1974.

While teaching in Hawaii she began to sell some of her paintings and do private commissions.

Linda actively promotes the work of living artists.  She is a member of Collectors for Connoisseurship (C4C) and has supported Shannon Robinson’s Windows to the Divine for many years.

Linda paints in her home studio in South Denver and with various artists when she travels.  She can work in all mediums but prefers watercolors and acrylics. Her favorite subjects are landscapes and anything nature creates.  Linda’s work is on permanent display in the Nagel Hall Art Collection at the University of Denver.  In addition her work can be found in private collections in Sweden, Ireland, Australia, Arizona, Colorado and Hawaii.